These are the writers, editors, columnists, researchers and photographers that run The Montclair Dispatch. They are professionals each in their own right. It is their passions and desires that drive them to write, to create and to publish. Many of them are still in the process of carving out their own place in our industry and in so doing have landed here at The Montclair Dispatch via many unique paths. It will be through their own personal lens and filters that we will see what is around us.

Erica Manansala is currently a student at Seton Hall University. Born and raised in Belleville, NJ to a mother who is a nurse for over 25 years now, it is no surprise that Ms. Manansala has committed her life to also helping people as she truly believes in doing good for others. With the support of her family, Ms. Manansala graduated in the top 15% of her high school class, where she was given the NJ Stars I Scholarship and has continued to achieve more scholarships at her current university. Ms. Manansala possess the incredible talents of not only extreme intelligence, but a vigorous skill set of multi-tasking a full-time occupation as she oversees three companies: Studio042 as Customer Service Representative, The Montclair Dispatch as Managing Editor and MontclairMounties.com as Store Manager, all while attending school full-time with an internship. “I consider Ms.Manansala to be the best of the brightest … I predict she is destined to lead her generation from the front of which ever field she settles into,” said Scott Kennedy, Publisher and Chief Photographer of The Montclair Dispatch. She is involved with the university’s Social Work Club and is a member of the national service fraternity, Alpha Phi Omega. With the infinite amount of exposure she has received from all experiences, whether education or work related, it has provided the necessary events to confirm her dream of better serving the people of society who need it the most. To her, her career isn’t as much of a profession as it is a complete and inexplicable part of who she is.

Catherine Baxter is the News Editor for the Montclair Dispatch. Additionally, Catherine has served on the editorial board for Montclair State University‘s paper, the Montclarion. She worked as News Editor, Managing Editor and Editor-in-Chief. Ms. Baxter recently graduated from MSU as a double Communications major in both Journalism and Public Relations, and is currently pursuing her Master’s degree in Public Relations well as a graduate certificate in School Communications.

Rachel Belsky is a junior studying English and Film at Montclair State University.  She has always enjoyed reading and writing, and now wants to take a break from research papers to try journalism. The Montclair Dispatch provides the perfect opportunity for her to explore the business. Ms. Belsky is involved with Residence Life, Club Soccer, and the Global Education Center at Montclair State. She’s not certain about her post-college plans, but is interested in attending graduate school and would like to work with a non-profit organization. Rachel is from Phillipsburg, N.J., with a twin sister and an older sister.

Joseph Michalitsianos is a junior at Rutgers University – New Brunswick, studying Journalism and Media Studies. After interning at the New York Times, Joe developed a strong interest in journalism of all kinds, but cares exceedingly about journalistic integrity and the honest coverage of pertinent issues of todays world. An avid athlete and son of two former national team rowers, Joe is a member of Rutgers Crew and enjoys sport of all kinds. After moving from London to Montclair when he was eight, Joe has a love for travel and exploring new places and cultures. When Joe graduates Rutgers he hopes to continue his education in journalism at a graduate program. After school, Joe wants to report for a news agency.

Steven Zang, a writer for the Montclair Dispatch, is currently entering his third year at Montclair State University in pursuit of a Bachelor’s degree in Filmmaking and a possible minor in Creative Writing. With a genuine passion for the art of visual storytelling, he focuses most of his attention towards reviews and critiques of what’s new in the entertainment industry, from the newest flicks at Montclair’s Bow Tie Cinemas to up-and-coming shows at Montclair’s very own Wellmont Theater. Mr. Zang’s post-college aspiration is to become a Late Night variety-series writer, whether it is through the confines of NYC’s Ed Sullivan Theater or the hallowed grounds of 30 Rockefeller Center Plaza.

Stephanie Schieder comes to us from Toms River, N.J. She attends Montclair State University where she is studying Communications and Media Arts. Ms. Schieder’s love for theatre (both as an actress and audience member) is the inspiration behind her theatrical and musical performance reviews. While enjoying all aspects of journalism, entertainment news is by far her favorite topic to report on. Stephanie plans on attending graduate school and pursuing a career in the media world, but in the mean time, she is content with playing an active role in the Montclair community. 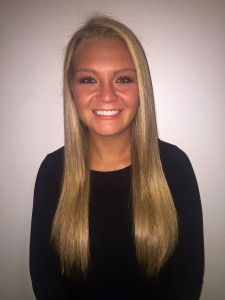 Rachel Hanrahan – Writer
Rachel Hanrahan is a local resident of Hasbrouck Heights, N.J., and attends Montclair State University. She is a Communications and Media Arts major with interests in broadcasting, journalism and public relations. Her passion for this field sparked when she visited and toured places like NBC Studios of New York City and CNN Studios of Atlanta, where she experienced the upbeat and exciting atmosphere of the media world. She aspires to one day see herself working in one of these places and continuing to strive for success in her journey. When Ms. Hanrahan graduates in the spring of 2018, she plans on attending graduate school to further her education. For now, her stop is right here in Montclair where she enjoys reviewing current entertainment news in her community for the Montclair Dispatch.

Rosemarie Salvatore graduated in May of 2016 with a master’s degree in Public and Organizational Relations from Montclair State University. She currently works as the assistant to the Director of Corporate Communications at RSI Bank in Rahway. Her undergraduate degree is in English, and she has always had a passion for the written word. She has previously worked in Publishing as a Proofreader and an Editorial Assistant. She loves to write and does so every chance she has, whether it be personally, for clubs and organizations she belongs to, or most recently, in a professional capacity. She is also an avid reader. Her favorite book, by far, is Jane Eyre by Charlotte Bronte. When she is not working or going to school, she is a huge fan of Sci-fi and Fantasy, her two favorite TV programs of all time being Star Trek and Beauty & the Beast (the 1987 version of each). Ms. Salvatore also loves art, animation (especially Disney), and is a crafter who specializes in scrapbooking & card making.

Brittany Abuhoff started working at The Montclair Dispatch as aWriter in 2016 after spending several years writing freelance articles for cycling and triathlon websites and serving on editorial boards different organizations. A Montclair native and 2015 high school graduate, Brittany is set to start college next year and is planning to study Education and Kinesiology with a Journalism minor. She currently works at the Montclair Bikery and as a Competitive Aquatics Coach for the Madison YMCA.

Phoenix Herring attends Rutgers University, majoring in Information Technology and minoring in English Literature. She additionally tutors at her school’s writing center, specializing in work with ESL and multilingual students. During the summers, Ms. Herring writes for our entertainment section, reviewing concerts and providing a pathway into the town’s thriving music scene. Additionally works as a waitress at Cafe Bonjour Montclair.

Eve Mahaney has been a photographer for the Montclair Dispatch since 2014. Mahaney started her path in photography shooting for her high school newspaper, The Mountaineer and local weekly The Montclair Times in addition to being the team photographer and Manager for the Montclair High School football team. She has documented their two years as New Jersey State Champions. On the strength of her images Mahaney was selected as an early intern at The Montclair Dispatch. “Eve demonstrated she has the ‘eye’ so common to the world’s greatest photographers, a trait that is not technical but an innate balance only enhanced by technical skills,” said Scott Kennedy, Chief Photographer and Publisher of The Montclair Dispatch. On the strength of that eye for composition in 2014 Mahaney was offered the opportunity to curate a gallery from the more than 250,000 images in the Studio042 archives. That first gallery was so well received she was asked to curate a follow-up gallery in 2015 which she entitled “Eyes on Me,” which was similarly very well received. Mahaney is currently enrolled at the Roy H. Park School of Communications at Ithaca College, majoring in Cinema and Photography towards a B.S. with a concentration in Still Photography as well as a minor in Psychology. After two years playing on the Ithaca College Women’s Lacrosse team, Mahaney decided to cease playing and instead become the official photographer and social media director for the team. Mahaney is a member of the National Press Photographers Association, NPPA. Mahaney prefers to shoot on Nikon cameras and her go-to lens is the 55-300 mm. She was born and raised in Montclair, N.J., and is the oldest with two brothers.

Emma Gallof is currently a sophomore at Montclair High School. Additionally, she works with children through the YMCA of Montclair. She has always taken an interest to photography, and would like to pursue live event photography as a possible career. Emma hopes that through The Montclair Dispatch she will be able to learn and grow as a photographer, and gain the skills necessary for a career.

Margaret Belkhyat is majoring in English and minoring in film at Montclair State University. Ms. Belkhyat hopes to take her passions and put her creativity behind the scenes. She enjoy reading and some of her favorite books are Frankenstein by Mary Shelley and A Thousand Splendid Suns by Khaled Hosseini. Her hobby for reading has stemmed into an enjoyment of writing. Growing up in Queens, NY has provided Ms. Belkhyat with lots of stories and adventures to portray in my writings of poetry and short stories. This also allowed her to have a sharp outlook which deeply influenced her enthusiasm for photography.

Looking for a previous staff member? Check out the Where Are They Now page to find out more info on what former Montclair Dispatch staff are up to!