By Catherine Baxter, News Editor on April 9, 2015No Comment

A man of many hats and inimitable talents, Kurt Andersen will be interviewed at Leshowitz Recital Hall at MSU during the 2015 Terhune Journalism Lecture. 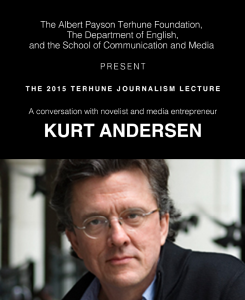 The esteemed author and media innovator Kurt Andersen will be visiting and speaking at Montclair State University on April 22, 2015. Brought to the MSU campus by the Albert Payson Terhune Foundation, the Department of English and the School of Communication and Media, Andersen will partake in an engaging interview conducted by Merrill Brown during The 2015 Terhune Journalism Lecture. The conversation will take place in the impressive Leshowitz Recital Hall and will cover topics such as broadcast media, writing, and publishing. The event begins promptly at 7:30 p.m. and will conclude at 9 p.m. Note, seating is provided on a first-come basis.

The American author has been praised by medias such as Vanity Fair, The Washington Post and The Wall Street Journal for his brilliant works. His most recent novel is True Believers, a story about coming-of-age and political scandal that jumps between the times of today and the 1960s. Prior to that, Andersen released the New York Times bestseller, Heyday, a story of how America came to be. The novel went on to win the 2008 Langum Prize as a result of producing the best American historical fiction of that year.

Not only is Kurt Andersen a celebrated novelist, but also he is an entrepreneur of the entire media industry. He is the host and co-founder of Studio 360, a public radio station that covers all things pop culture and the arts. According to Studio 360, their podcast will “steer you to the must-see movie this weekend, the next book for your nightstand, or the song that will change your life.” Andersen is also a returning contributing writer and editor to the New York Times, Vanity Fair, New York and Time.

It comes as no surprise as to why the said programs at Montclair State have invited Kurt Andersen to share his wealth of knowledge with the attendees. The conversation will without a doubt be a can’t-miss event.