By Erica Manansala, Managing Editor on May 12, 2016No Comment

In efforts to make the best of the MFEE's Amazing Fundracer 2016, a generous donor will be matching donation only on Fri. May 13th!

Friday the 13th is a lucky day for MFEE’s Amazing Fundracer 2016! 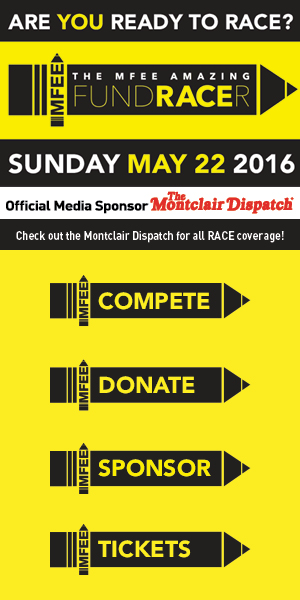 MFEE is a non-profit education fund founded in 1991 to generate private funding and community support for Montclair Public Schools and to enhance the educational experience of all of Montclair’s public school students. In efforts to continue the surplus of support and the sole belief in the Montclair school system, this year, they have created a fun and interactive fundracer for all to enjoy! A generous donor will match donations between $10 and $100 to any team made this Friday the 13th.  MFEE Executive Director Masiel Rodriquez-Vars suggests that you “act early because the offer expires once we reach $2500.”

Teams of two will complete challenges at a series of locations to earn clues that point them to the next stop. Teams will be eliminated as the race progresses, until the top four teams reach a final challenge.  MFEE hoped to have 50 teams, but Rodriquez-Vars said they exceeded that goal:  “We were a little nervous that we wouldn’t find 100 people to sign up, especially since nobody really has any idea what to expect! But we have more than 50 teams of incredible people participating, and they have generated enthusiastic support for the event, for MFEE, and for our schools.”

The Fundracer has attracted a wide range of competitors, including a father-daughter team, a team of Montclair Public Library librarians, and teams from all 11 Montclair public schools.  There will be a duel between dentists, with Dr. Ed Gold going toe-to-toe against Dr. Dave Ferguson and Dr. Jessica Joseph.  And Montclair’s firefighters and police will field five teams, including the “Fire and Vice” duo of Fire Chief John Hermann and Police Chief Todd Conforti.

The event will begin at Nishuane Park at noon on May 22, with music, mingling, and an introduction of the teams.  The first challenge will set up at 12:45, and the race will kick off at 1pm.  Spectators can follow MFEE on twitter to get locations of the challenge stations on race day. Rodriquez-Vars reminds spectators that they can get a front-row seat to all the action by signing up to volunteer at signupgenius.com/go/10c0c4bafaa23abf58-mfee

Hope to see you all there! Go Montclair!